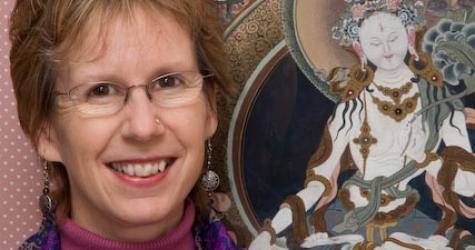 High school gives many students an inkling of what they want to do with their lives. Dr. Anne Pearson spent those formative years in New Delhi in the early 1970s and began to think that her career path might lead through India.

“It certainly intrigued me,” says Pearson, who now teaches in the department of religious studies at McMaster University. Pearson’s father, Geoffrey, served as Canada’s Deputy High Commissioner to India for three years, and was a big supporter of the Shastri Indo-Canadian Institute in its early days.

After finishing her undergraduate degree at the University of Toronto, Pearson returned to India on a trip that confirmed her desire to study some aspect of the country’s rich culture. She took this up at McMaster where she got her master’s degree and PhD. While studying for her PhD she received a Shastri doctoral junior fellowship. “It allowed me to go to India for 15 months and do the research that formed the basis of my dissertation,” Pearson says.

The support of the Shastri Institute was important in other ways, too. “Going back to India and being there on my own-being outside the bubble of the Canadian High Commission-was different,” Pearson says. “Even just to be met by Mr. Malik from the Shastri Delhi office and guided through the indescribably chaotic Indira Gandhi Airport in the middle of the night was welcome.” Pearson’s research involved both studying ancient Sanskrit texts to learn the history of Hindu rituals and field research. She says the Shastri office was always helpful when she encountered problems on these trips outside New Delhi.

She experienced this helpfulness in a variety of ways. “I was very grateful that I was able to renew the fellowship,” Pearson recalls. “I extended it for another five months-that was important to do the research to the extent I desired.” Pearson’s doctoral thesis-“Because it Gives Me Peace of Mind”: Ritual Fasts in the Religious Lives of Hindu Women-was published as a book in 1996.

According to Pearson, these sorts of cultural studies are crucial to understanding the country and to ensuring the success of development projects. “A development discourse that is not firmly planted in a knowledge of Indian culture and religion is not very fruitful,” she says. “Shastri should continue to vigorously support these cultural studies.” This is no doubt a view-to say nothing of a diplomatic tone-that would make her father proud.